Buchhandlung Löwenherz congratulates Giovanni’s Room and its owner, Ed Hermance, on the occasion of the bookshop’s 40th anniversary, to be celebrated Saturday, October 5, 2013.

It is now 2013 – 20 years ago in July 1993 the first gay and lesbian bookshop in Austria, Löwenherz, opened its doors in Vienna’s 9th district. But it isn’t and hasn’t been the first of its kind if you consider the whole Gay Planet. There were many others coming before us. They were models for Bookshop Löwenherz. One of them is Giovanni’s Room. We are walking in their footsteps. 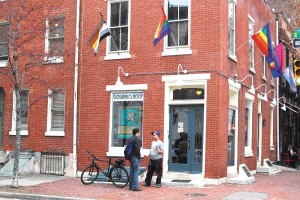 But many of our predecessors haven’t made it up to this day. Remember the A Different Light bookshops, or Oscar Wilde in the USA, remember Sodom, Lavendelschwert, Männertreu, Ganymed, or Max & Milian in Germany – just to mention a few. They have all provided LGBT literature plus pride stuff, CDs and DVDs to their communities. They were hotspots of LGBT culture with their readings and other events. They were offering workplaces for their LGBT personnel. In the 1990s and early 2000s all of us LGBT bookshops were thriving over the globe. But now times have become hard for us. That’s why many have given up; why many had to close their doors forever. END_OF_DOCUMENT_TOKEN_TO_BE_REPLACED